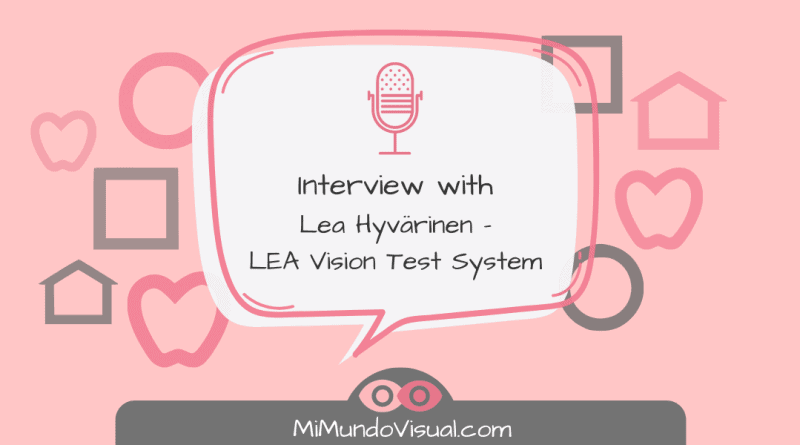 Today we have the pleasure and honor of being able to interview Dr. Hyvärinen, a Finnish pediatric ophthalmologist and creator of the LEA Test Visual System.

Before we start the interview, we would like to ask everyone to help Dr. Hyvärinen to preserve her legacy by signing a petition posted on change.org! You can read more on the petition in the following link:

Your first version of the LEA Test was made way back in 1976. The 4 LEA symbols, the square, the circle, the house, and the apple, are now being used all over the world.

In 1976 I was asked to train the team starting to work at the new Vision Rehabilitation Centre of the Finnish Federation of the Visually Impaired, in Helsinki, Finland, because I had worked with Dr. Louisa Sloan and Gunther von Noorden on visual functions 1967-69 as apart my work in charge of Fluorescein Angiography Service that I had developed in Finland as my PhD work and started as the clinical service in 1967 at the Wilmer Institute, Johns Hopkins University in Baltimore, MD as Dr. Maumenee’s Research Fellow.

The answer was: NO, if you want to have good tests, you have to design the pictures yourself; the psychophysicists would calibrate them correctly. I was advised to use square and circle as the basic forms and modify them so that they would blur equally.

I drew the forms during the summer 1976 numerous times as 15cm pictures using pen and paper until the forms blurred equally. Then an artist drew them for the testing and these LH-Symbols were calibrated using the Snellen E. When the tests became available in the USA, the name had to be changed, because in USA LH meant Lighthouse.

When the printing techniques developed and affected the edge quality, the Symbols were calibrated again with Landolt-C. This information is on my homepage www.lea-test.fi, which is soon moving to www.leatest.com in the United States. There are many test situations that require special  testing for near vision at different ages: single symbols on cards, symbols on the Near-Vision Card which is the most important test, because with it we can become aware of “increased crowding”. i.e. the child has difficulties in seeing letters, if they are close to each other.

The number of tests increased rapidly to fill the special needs. Then contrast sensitivity, CS- studies showed quite a new way to see the world and we used the laboratory at the Dept. Psychology to study all common eye and visual pathway diseases and disorders. We worked closely with colleagues in other Nordic countries and developed a way to see what could be done to understand and improve visual functions especially in children, but also in adults.

In 1977 we tested a Finnish boy, who did not have measurable visual acuity, but was not blind. That showed us how little we knew about atypical vision and led to the studies in several countries to notice and assess children and adults with atypical vision. The years 1977-2008 meant wide new areas in visual functioning being published. This might be a beginning of the history of my tests.

1. How did you come up with the idea of creating these 4 symbols and not any others?

I learned about testing of vision examining the patients with Dr. Louisa Sloan before they came to my fluorescein angiographic study (that study technique I had developed in Finland as my PhD thesis and was then invited to create the first clinical laboratory at the Johns Hopkins University, Wilmer Institute in Baltimore, Maryland, USA).

Dr. Sloan’s team explained all details of their thorough examination and we planned the angiography based on the details that were important to see in the angiogram. This was a fascinating way of learning about retinal circulation and changes in diabetes, which was a huge problem those days, in other vascular changes and infections in the retina and choroid.

2. What is special about a square, a circle, a house, and an apple that others do not have?

That time visual acuity measurements were studied by Dr. Sloan, who had developed the “Sloan Letters”, which were becoming a standard in clinical examinations.

When we started the first Vision Rehabilitation Centre at the Federation of the Visually impaired in Helsinki, Finland, I did not find good Visual Acuity tests for children and went to the Department of Psychology, where Professor Veijo Virsu had built computer based Contrast Sensitivity measurement, so I asked whether he or the psychophysicists knew correctly planned visual acuity tests for children.

We discussed the pictures and I was advised to draw a square and a circle as the basic forms and to modify them to four optotypes, which I did:

During the summer 1976, I drew the square, the circle, the house and the apple 15 cm high using paper and pencil until the 4 forms blurred equally at a same distance, when I approached them on our yard without knowing their order in the row.

Then an artist drew the final forms with the specified size. Next the four forms were compared with the Landolt – C in a standard staircase to find the sizes that resulted in the same VA value as the Landolt – C.

Although the basic forms were properly standardized, they had to be calibrated twice later, when printing techniques changed and affected the edge quality, so the square had to be changed a fraction. Details on these studies you can find on the homepage www.lea-test.fi, which is moved on the American LEATEST.com homepage during this year.

3. Can you walk us through what encouraged you to create this whole system of visual tests? What was the inspiration & motivation?

I had learned about the crowding phenomenon at Wilmer, so it affected the design of the near vision test “LEA SYMBOLS for testing at 16 inches (40cm)”, which to me has always been the most important test to start with, because by measuring first (1) with the 100% spacing test on the front side of the test and then (2) on the back side with the 50% spacing test you learn an important finding:

When I now read publications, increased crowding phenomenon is not examined and in the grating acuity measurement, the child (adult) is asked to define/show the direction of the lines, not whether there are distorted lines in the centre of the grating. The changes have been known since 1981, when Janette Atkinson reported them at the Pisa Conference, but still last year publications mention only the direction of lines, except in my text on Visual Pathways and Clinical Tests.

4. The LEA Test Vision System helped transform the diagnosis of low vision in children at a very early age. What do you think needs to be further investigated today?

Each child should be better known and understood in his/her ways to function by medical specialists working with Early Intervention and State Special Schools, because the knowledge on functioning is there. All specialists should see the child and not only the disorders, which was typical in the Nordic care of children in 1970s to 2008 (Table 1):

Table 1. A child with loss of several recognition functions and problems in awareness of space and spatial orientation may show great variations in behaviours.

He/she may function like a blind child in communication situation without eye contact and with no responses to low-contrast facial expressions of the other people, yet s/he may be aware of some communicative visual information, like gestures and body language (motion).

Orientation in space may be poor, based on cane to feel surface structures, remembering routes, street signs and landmarks in a certain order in a known environment.

This ‘atypical’ child may run unhindered when using visual information in a well-known space and then push the cane in front of him/her to learn about the surface of the path or street that could not be visually perceived (“a sighted-blind child”).

5. After all these years of research and work with so many babies, children, and families, is there a particular case that stands out in your memory?

A few children changed us specialists’ thinking, because they were “severely disabled” and yet were higher functioning than most “normal” children.

I have reported them in the 40-page text that I am still working on as teaching material for medical students, residents and young medical doctors so that they would see the functioning child more than the disorders.

6. What has been the best moment of your professional career?

When a bright girl with CP and more than 10 vision disorders called me that she had applied to study at a part of the university, where she wanted to study, and had just been accepted as one of the 70 students among the 1000 applicants.

Finally, at MiMundoVisual.com we want to thank you very much for joining us today, we hope that with this small contribution we can help families realize the importance of detecting any visual problems at an early stage of life, and not delay the first consultation with an eye specialist so that any visual impairment can be diagnosed early.